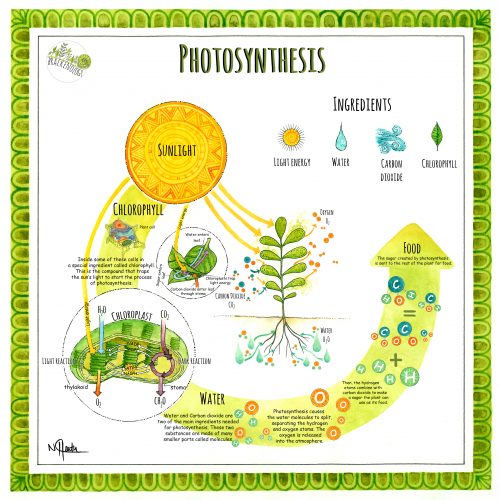 Plants are all around us. They grow and thrive, all without apparently moving from their primary position in the soil (apart from banana plants that “walk” along). So how do they do this without getting around to look for food like us? Their trick is to let their food come to them, or flow over them more precisely.

You have probably heard of photosynthesis, the process that plants use to turn just water, carbon dioxide and glorious sunlight into useful energy and sugars. This is a remarkable process that provides the plant with all the energy it needs (and in some cases some to spare) while also providing us with the incredibly useful waste product of oxygen so that we can breathe and continue with our own processes. But the intricacies of how plants do this have been hidden from scientists for quite some time, and only with advancements in the mysterious field of quantum physics have some answers become decipherable, if not complete. So just how do plants use quantum physics and why is this so amazing?

Let’s start at the top. Photosynthesis begins with photons, high energy particles emitted by the sun, being absorbed by the plants. These photons vary in wavelength and therefore energy, with the plant absorbing only the red, longer wavelengths. The other wavelengths like blue and yellow get reflected which is why plants mostly appear green. This absorption of light and energy happens within the leaves, in special cells called chloroplast. These chloroplast cells in turn house tower-like structures called thylakoids that are stuffed with molecules of chlorophyll. Think of the thylakoids as the power stations and the chlorophyll as the generators. Just like generators, these chlorophyll are the source of energy creation for the plant, and this is due to their unique structure.

Chlorophyll are mostly composed of a hydrocarbon backbone, just like most sugars you will find. While there are a few different variations of these chlorophyll, all chlorophyll contain something called a chlorin magnesium ligand; a magnesium atom bound to surrounding molecules so that it has just one lone electron left on its outer ring. This lone electron is the key to producing energy in all plants, as it is unstable enough that a photon passing through the chloroplast will hit this electron and knock it out of its orbit. Normally this would just create a positively charged magnesium ion but in this instance, the lone electron does not get knocked away entirely. Instead it still orbits the magnesium atom, freer than it was, together with a now positively charged space where the electron was in orbit. This strange state of inferred polarity, with both a negative electron and a positive charge present, is called an electron-hole pair or exciton and it is this polarity that allows it to store energy as a battery does and provide energy for the plant.

But the exciton cannot provide energy while ‘attached’ to the chlorophyll, instead it must get to another part of the cell called a reaction centre and undergo a process called charge separation. The positively charged space, the ‘hole’ of the electron-hole pair, is important to this as it is this space that allows the exciton to move. Think of this new hole being created as a seat being freed up in a packed row of football seats you need to get out of. With an empty seat available everyone can now shuffle along and you can get to the end without having to lose a seat as it were. But while it does this, the exciton is losing energy so it must do this as quickly as possible. To get to a reaction centre where the exciton’s energy can be released means crossing any number of other chlorophylls which are tightly packed into the chloroplast like sardines in a can. Think of the route as hundreds of stepping stones on a lake and you are the exciton, trying to get from your stepping stone to the shore. In your cupped hands is some water and this represents the energy the exciton holds, which leaks

away a little more with each step you take. There are hundreds of possible paths and to limit the amount of energy lost, the exciton must take the shortest route to the shore. But the only thing is the exciton doesn’t know where the reaction center is. Furthermore the energy conversion rate in photosynthesis is pretty much 100% efficient. So how do these excitons find the path to shore so quickly, while blindfolded, and still retaining all of the water in their hands?

It was previously accepted that the free electrons just bounced from one chlorophyll to another seemingly at random, but this would be way slower and less efficient than the near 100% efficiency we know photosynthesis to be capable of. One theory is that the exciton takes all possible paths at once. All in a fraction of a fraction of a second. This may sound odd, and that’s because it is, as physics in the quantum field usually is. It relies on a principle called quantum superposition which says that particles can be in more than one place at the same time, and it’s this principle that scientists now think plants use to create energy so efficiently.

A rudimentary explanation is that in the subatomic world things usually act as either a wave or a particle. A wave such as light is able to cover multiple areas as it spreads; for example if an ocean wave hits a sea wall, the whole wall gets wet. A particle on the other hand represents a singular point and direction; like a bullet fired at a wall, it would leave just a single mark. Sometimes though, just to make it confusing, particles can act like waves. The most famous example of this is the Double Slit Experiment that some may remember from their school science lessons, where a single laser source passed through two slits in a card should produce a pattern representing a particle, with only two ‘bullet hole’ locations appearing depending on which slit the particle passes through, but instead an interference pattern indicative of a wave is produced(fig.1). This suggests that the particles are not acting as they should, but instead acting like waves, accessing the possibility of all possible landing locations. This wave-like property in the excitons case allows the particle to spread out and explore the probability of pathways ending at the reaction centre, passing along all routes at the same time, all in one millionth of a billionth of a second (called a femtosecond). This probability of a particle being in a specified place is an underlying basis of this theory, as much like Schrodinger’s cat, the particle could be in place A, place B or place C, but the fact that you cannot see where it is means that it is in all of these places at once. Much like the unseen cat in Schrodinger’s box which is both dead and alive until you open the box to see, at which point it becomes whichever of those two you observe. 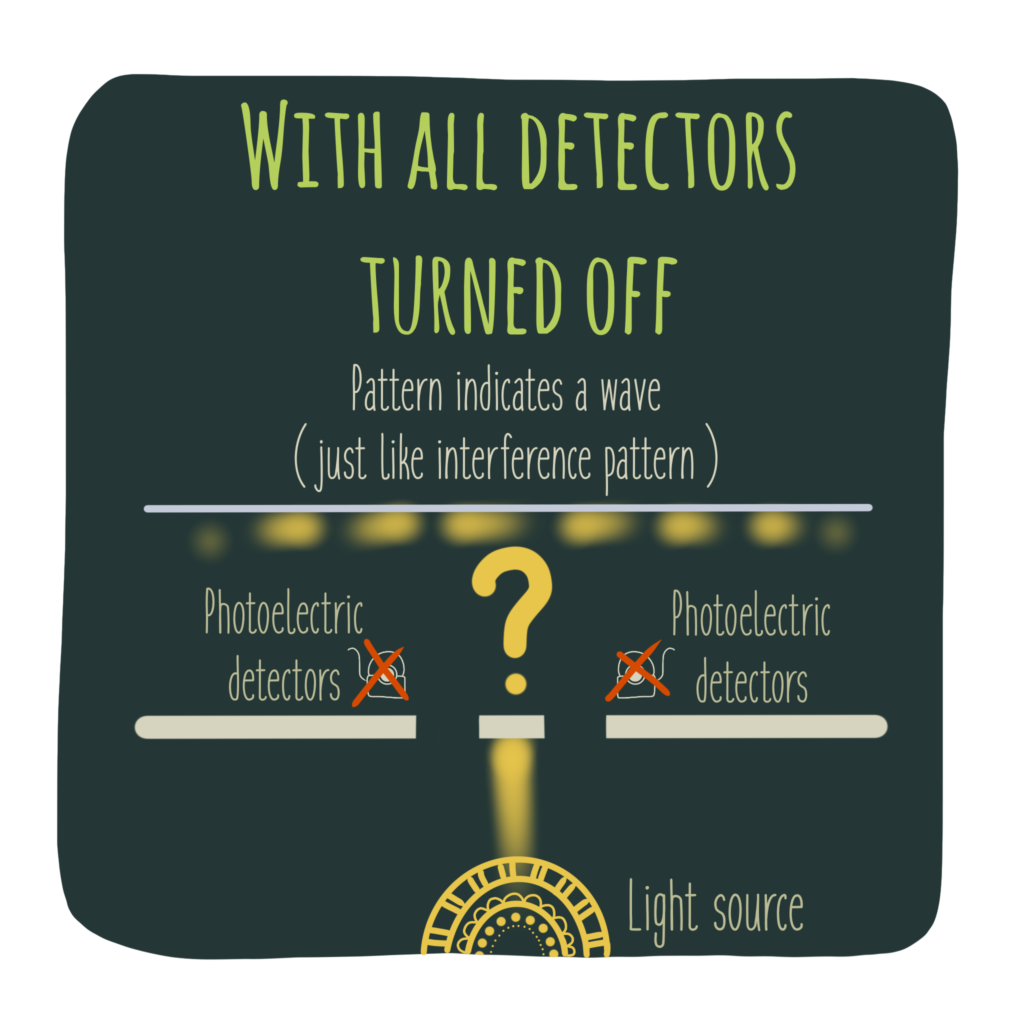 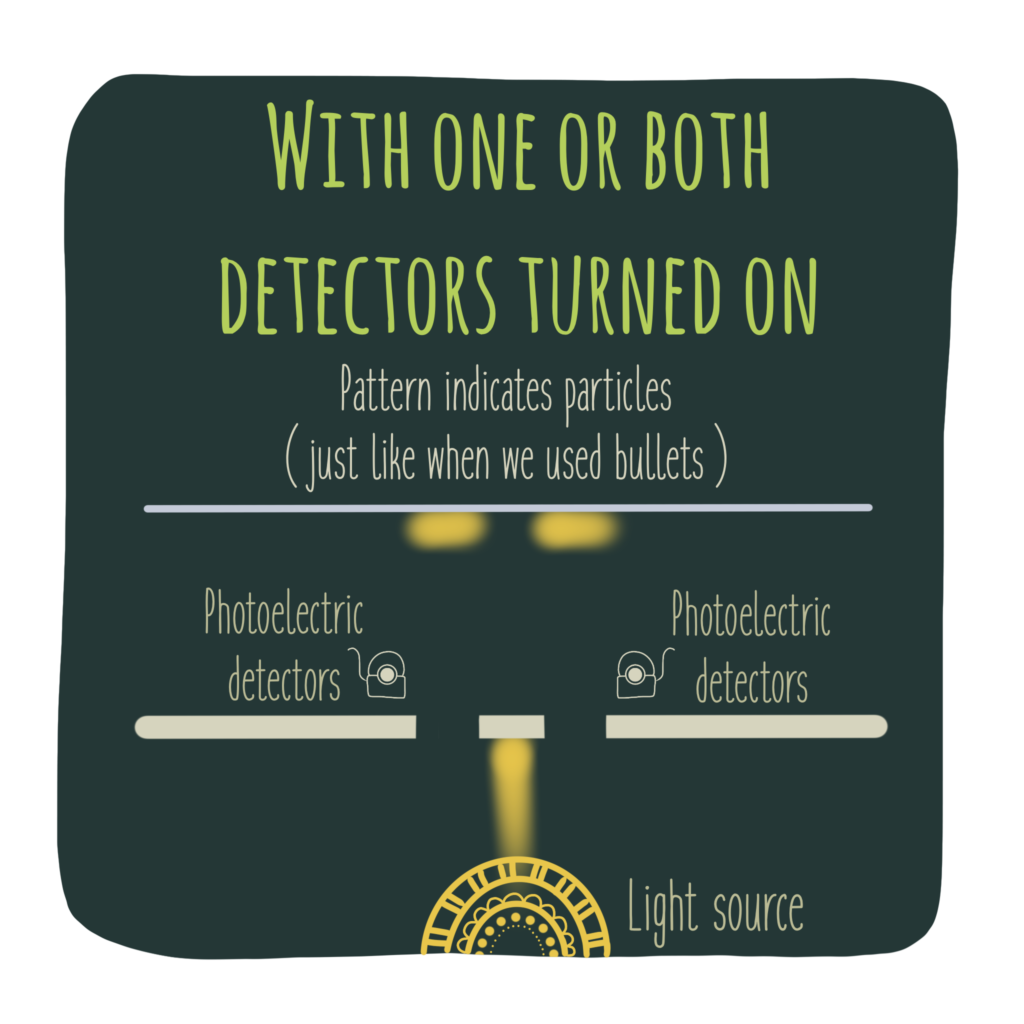 Just like the cat, the possibility of a particle’s location is removed once you observe it. An example of this is a variation on the Double Slit Experiment, where photons are fired one at a time through one of two slits at a piece of photography paper. If one were to just look at the photography paper after the experiment without knowing which particles went through which slit the paper would show an interference pattern indicative of a wave, suggesting the particles are ‘experiencing possibility’, for want of a better phrase and this is called quantum coherence. However, if a device is placed by the slits to observe which of the two gaps the particle passes through, the photography paper will show a pattern indicative of particle behaviour. The act of observation is enough to change the particle’s behaviour. (The double slit experiments have a few variations, which can blow your mind even further ​like this one which implies particles can change the past.)
While this sounds unbelievable enough, some scientists argue that this behaviour under observation is exactly why this process can’t happen in nature. Observation in this sense also includes any type of interference in the process, meaning any other particles the exciton comes across would force it to act like its true particle self and not a wave. This is called quantum decoherence and is the reason why all the experimenting in pursuit of quantum computers is done behind closed doors in sterile vacuums. From our understanding particles will only act like waves if nothing can ‘see’ it doing so at the time. So this makes plants – that typically live in non-sterile places that have things like weather – very unlikely candidates as nature’s quantum computer. A way to test for quantum coherence in a system is to look for what’s known as a ‘quantum beat’. If a system is fully coherent then firing varying pulses through the system would show interference patterns as the pathways cross, just like the pattern you get when light waves cross in the double slit experiment, or when two different sound frequencies played together appear quieter at intervals as they cancel each other out. Greg Engels at the University of California was the first to test for coherence in chlorophyll by firing three different pulses through them. After a night of staying up and piecing together his results, he saw the pattern that changed the way scientists think about plants. He could see the interference pattern clearly, indicating that the pathways crossed yet remained active instead of being interfered with. In other words, quantum coherence!

While we have increasing evidence of how plants are able to utilise quantum physics we are still struggling to figure out how. The ability to ensure quantum coherence in a volatile and unsterile environment is a feat that physicists cannot currently emulate, as they still struggle to keep coherence under the most stringent conditions. Hopefully further research into just how plants maintain this coherence will give us new knowledge we can utilise to create cleaner, more efficient energy among other things. Until then, we can only wonder what other surprises they hide. One such recent surprise is that they ​create and utilise electromagnetic waves to communicate with bees​. Maybe the production or presence of EM waves helps them maintain quantum coherence somehow too? With any luck, the answers are just around the corner.

If you would like to read more wonderful things written by Robbie Sidhu please head over to his website and show your support.