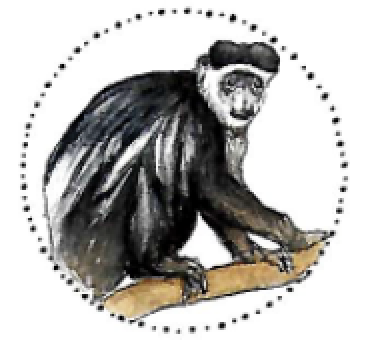 Mambo! My name is Guereza. I’m an eastern black-and-white colobus monkey, sometimes called mantled guerezas. I’m one of the types of monkeys that live in the forest here at Brackenhurst. You may have heard from my fluttery neighbor, the Layman butterfly, about his life here. Now it’s my turn to share with you what my days in the trees look like.

An Old Monkey with no Thumbs

My Latin name is Colobus guereza. “Colobus” comes from a Greek word that means “mutilated” or “docked”, which is because, unlike other monkeys, we don’t have thumbs. And we are called mantled guerezas because of the long, silky white hair that runs down our backs, called mantles. “Guereza” is the native name for my species in Ethiopia. There are colobus monkeys all over Africa but my particular species lives mostly in Nigeria, Cameroon,Ethiopia, the Democratic Republic of Congo, Tanzania, and here in Kenya. We’re spread all the way across the middle of the continent!

Now, I’m sure you’ve seen plenty of other kinds of primates in Kenya – vervet monkeys, Sykes’ monkeys, patas monkeys, baboons. We colobi have something in common with all of those monkeys – we are known as Old World monkeys. The term “Old World monkeys” refers to a specific family of primates (Cercopithecidae) that includes 138 species, making it the largest primate family. “How old are Old World Monkeys?” you might ask. Well, they’re pretty old. Old World monkeys evolved about 55 million years ago. I come from an old, old family, but just like any family, we’re made up of many different types, shapes, and sizes. How I and my fellow mantled guerezas spend my days is not the same as every monkey.

Life up in the Trees

I spend all of my time in the forest. In fact, I am almost entirely arboreal, which means I spend just about all of my time in the trees. Sleeping, eating, playing – it all happens up here. (If I find myself in an area where the trees are less dense I might climb down to the ground to collect some food or to travel to a new part of the forest.) Sometimes I like to use the tree branches as trampolines. I can spring up to 15 meters (50 feet)! If you’ve ever been to the circus, I’m kind of like the trapeze artists who swing from bar to bar.  Colobus monkeys live in both deciduous and evergreen forests, so a indigenous forests we have here in Tigoni are perfect for us. My family and I moved here in 2015 – we were the first colobus monkeys to live in these forests in over eighty years! The variety of plants and trees here make it a wonderful home, as well as the river that runs right by the forest.

When it’s time to find some food I start by looking at the branches around me. People often think that we only eat leaves but I also eat fruits and seeds and even some bugs! My stomach has four separate chambers and this allows me to eat toxic leaves and unripe fruits that other monkeys won’t eat. (I can even eat concrete if I need to, but I don’t like to – gross!) Young, tender leaves are tastier, but if other types of monkeys are around then I’ll eat more mature leaves because I don’t have to worry about the others stealing my food.

My family is also called a troop. Troops of colobus monkeys usually have about five to ten members. In my troop, I am the boss, the dominant male. I have several female mates and they have their children. I used to be with a different troop, but, like many young, male mantled guerezas, when I matured I left to find my own. Females will stay with the group they were born into. My troop and I have come and found our own, well-defined territory in the forest here at Brackenhurst. If you are ever out for a walk in the woods early in the morning you may hear my croaking roar resonate among the trees. I’m not angry, but I’m letting you know that you’re on my turf.

Sometimes you can find me helping the females take care of the babies. Baby mantled guerezas are born with all white fur and cute, little pink faces. They will stay pretty attached to their moms until they are about seven months old. At that age they can start playing with the older kids which helps them get stronger. Now, all of this babysitting can be tiring. While we mantled guerezas are diurnal, like humans, meaning that we are active during the day and sleep at night, we are pretty laid back and will often spend a lot of the day napping as well. If we aren’t eating or looking for food, taking care of babies, or playing, you can bet that we’re taking a nice nap up in the trees.

I’m particularly thankful for this new forest to live in because it feels safe to me. Some types of eagle try to hunt us, as well as leopards and even chimpanzees! Some humans even hunt colobus monkeys. They like to use and sell our skin. But isn’t our fur even more beautiful when it is on our backs, swinging from tree to tree? We are also threatened by deforestation. Many humans like to cut down our homes to build new roads or towns or farms. They don’t know that someone lives there already. But this forest feels like a space that is safe from those risks.

Brackenhurst has offered us a lovely new home and we hope to stay for a while. If I see you around, I’ll give you a roar!

A Day in the Life of a Brackenhurst Butterfly